Ar n-eachdraidh:  A History of the Gaelic Society of Vancouver 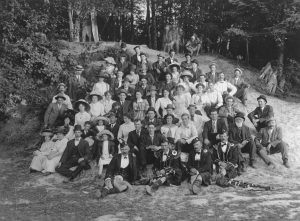 The Gaelic Society of Vancouver was formed in 1908 by a group of dedicated Gaelic enthusiasts who wanted to establish a society where they could meet and enjoy each other’s company and fellowship. The first meeting of the Society was held on February 8th 1908, at the Sullivan Hall on Cordova St. Vancouver.  The aim of the Society established at that time was to promote the Gaelic language and to preserve all matters of interest to the Celtic race.

The above picture shows our Gaelic Society members enjoying the annual picnic at Bowen Island in 1911.

In the early days, society meetings were held bi-monthly, and they were of great value in providing a community where people of a common heritage could meet and find solace in the sharing of joys and sorrows.  The Society also helped the sick and disabled, and gave financial aid to the indigent.

In the 1920s, the Society began to participate in Mòds, or Gaelic musical festivals in Vancouver, modelled after the Royal National Mòds held annually in Scotland since 1891.  This led to the formation of Mòd Vancouver many years later, and that organization continued the tradition by holding Mòds in Vancouver every two years from 1990; the last one being held in May 2007.  Over the years, these festivals have attracted many participants from Scotland, the United States, and from all across Canada.

In 1953, the Gaelic Society was very active in the acquisition of the Scottish Auditorium at 12th Avenue and Fir Street, in Vancouver, which provided a venue for all Scottish societies and organizations to meet and hold functions. Some of the money to purchase the Auditorium was bequeathed in the Will  of Mrs Robert Fiddes, who was Chief of the Gaelic Society from 1920 to 1922 and again from 1926 to 1928. The Society Chief at that time, the late Mr. Norman Finlayson, was active in initiating the purchase of the old Athlone School on the site, which was transformed into the Scottish Auditorium.

Again in 1983, several members of the Gaelic Society, including past chiefs Murdo & Mary MacIver, Duncan MacKenzie, and Dr. John Angus Smith, together with Duncan Fraser of the B.C. Pipers Association, and several members of other Scottish organizations, were active participants in the acquisition  of the land, and in organizing the building of the current Scottish Cultural Centre on Hudson Street, in Vancouver.

Throughout the years, the Gaelic Society has held cèilidhs at the Cultural Centre, where Gaelic songs and a variety of entertainment could be heard and enjoyed by all.  The Society has also offered Gaelic language lessons at beginner and intermediate levels for many years under the guidance of Maureen Lyon, Sharron Gunn, Peigi MacKinnon, and John MacLeod.

A few years ago, the Vancouver Gaelic Society members marked an important milestone when they met on May 3rd, 2008 at the Scottish Cultural Centre to celebrate the 100th Anniversary of the Gaelic Society of Vancouver.   And just last year, we celebrated our 110th Anniversary at the Cultural Centre together with our friends from the  Vancouver Island and Washington State Gaelic communities.

It is encouraging to see that, more than 100 years after the formation of the Gaelic Society of Vancouver, our Society events are still attended by enthusiastic members and Gaelic language learners, keen to maintain and further their links with the Gaelic language and culture.

The motto of the Gaelic Society is ‘Lean gu dlùth ri cliù do shinnsir’, which means ‘Follow closely the traditions of your ancestors’. The Society has always done its utmost to support our motto, and to preserve the precious heritage and culture of the Gael.

Gaelic Society Chiefs from 1908 to present: